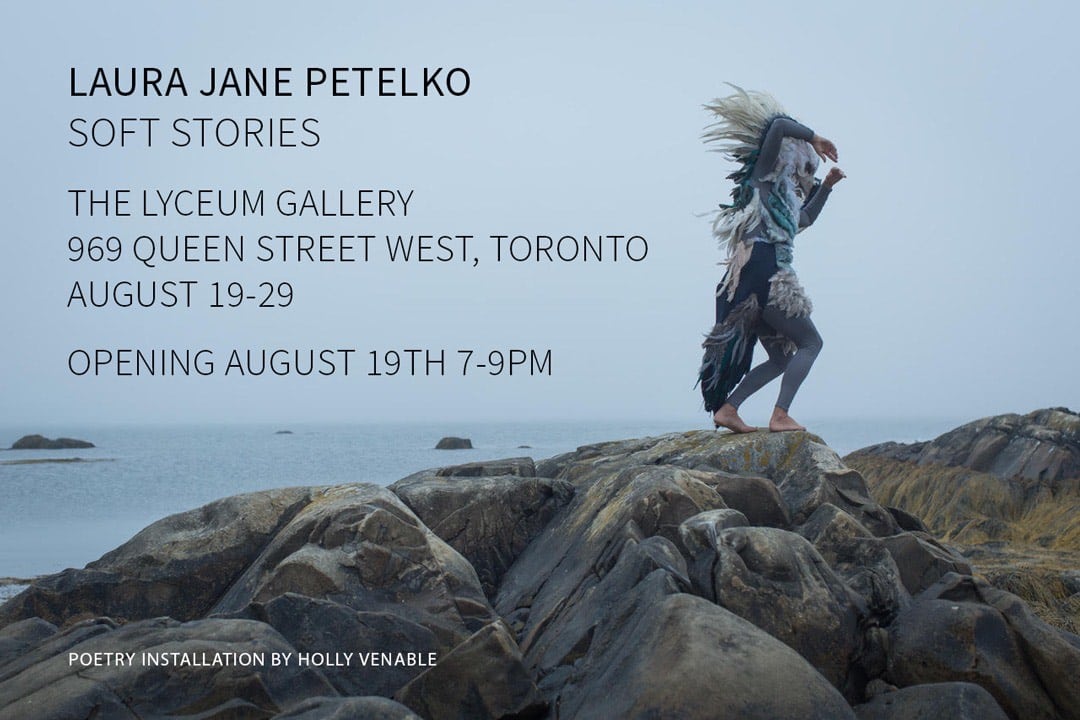 We are pleased to present Soft Stories, a photographic series by Laura Jane Petelko in collaboration with Sara Wood, set to poetry by Holly Venable.

Calling to themes of desire, longing and the potential for ecstatic awakenings, this collaboration of words and images opens August 19th in The Lyceum Gallery from 7-9 pm. A signature cocktail inspired by the work will be served. Contact tracing and masking are required.

Recently exhibited in Times Square, this work was inspired by a conversation about the “Furry” subculture. Photographed by Laura Jane Petelko on Nova Scotia’s rugged, barren coast, they convey a collective longing to commune with the very nature we are ever losing touch with, while at the same time consuming. This work is about the world we tread upon with need and appetite, our growing isolation and the longing that invariably exists behind the artifice. The rugged Canadian landscape allows us to access a majesty that subsumes our human and sometimes awkward attempts at communion, enveloping us in quiet indifference.

When Soft Stories originally showed in the Lyceum Gallery in 2019, it had a profound effect. The work has since gained international exposure in Brussels and New York through public art installations. Its message, almost prognostic, spoke to a time of enforced isolation and the idea of creating a narrative capture of conversations between Laura Jane, Holly and other viewers of the work took hold. Deeply inspired by Wilding, a new piece making its gallery debut at The Lyceum on August 19th, an interpretation made as an offering of words will be drawn out on the walls in poetry by Holly Venable.

“In a flush of movement
A gesture of devotion, one final offering thrown down becomes an awakening
Moulting, transformed in a grounded gyre
The spirit decanted is possessed by renewed hope”